NetLogo is a widely used agent-based modeling platform and language developed by CCL at Northwestern University (see the official website). It is conceived to be accessible to non-programmers and thus enhances inter-disciplinarity in the construction of simulation models, but can also be used to program large scale complex models (despite its bad reputation, see this paper testing NetLogo speed performance and suggesting code improvements). As it runs on the JVM, it is naturally integrated into OpenMOLE. OpenMOLE provides a NetLogo task which expects the following parameters: The task comes in two versions : NetLogo5Task and NetLogo6Task, be sure to select the right version of the task according to the version of NetLogo you are using (5 or 6). Here is an example on how to write the NetLogo task for the model Fire.nlogo: In this example, the command list contains: If you use the forever button go in the NetLogo GUI don't forget that you will need something like "while [condition] [go]" in the command list, as openmole won't loop your go function by default. The replication and density OpenMOLE variables are used as parameters of the NetLogo program. Therefore they appear as inputs of the NetLogoTask. Similarly, an output of the model is considered and collected by OpenMOLE at the end of each model execution. It is written as netLogoOutputs in the definition of the task.

The arguments for a NetLogoTask are the following : The properties to be adjusted with set : The former mapping syntax using netLogoInputs and netLogoOutputs is deprecated, but still works until further notice, for compatibility reasons.

Several NetLogo models rely on extensions (which are basically jars providing new primitives in interaction with the NetLogo workspace). By default, NetLogo will search extensions in its installation folder (which will not work here, as OpenMOLE embeds NetLogo as a jar), but also in the model directory. To be able to run a model with extensions, put the extension folder in the same directory as the model source, and activate the option embedWorkspace. It goes the same for all additional source files (.nls generally used for large models) or configuration files.

An example of NetLogo model exploration 🔗

We now present step by step how to explore a NetLogo model. The Fire model is a common NetLogo example available in the NetLogo common model library. It studies the percolation of a fire in a forest depending on the density of the forest. This model has one input: density, and one output: percent-burned.

We would like to study the impact of the density factor for a fixed population size. To do this, let's build a design of experiment where the density factor ranges from 20% to 80% by steps of 10. Since the Fire model is stochastic, we are interested in doing replications for each instance of the density factor. Results for each replication will be stored it in a CSV file. In this example case, we will perform 10 replications per step. This stays a too small sample to draw up any robust conclusion on this simple model, but we take this value here for the sake of illustration. When designing your experiment, you will have to find a compromise between the precision on stochasticity and the number of parameter points explored. More elaborated methods, in the case of a calibration of a stochastic model with a genetic algorithm for example, will automatically deal with this compromise (see this page for more info on genetic algorithms and calibration). You can get the NetLogo implementation of the model here.

The Design of Experiment 🔗

We first need to define two OpenMOLE variables in order to repeat our experience 10 times for every step of the density exploration. These two variables are: Given these variables, the definition of the exploration in OpenMOLE writes as follows: This design of experiment will generate 70 distinct sets of input values for the NetLogo model: We now need to compose this design of experiment in a complete workflow in order to run the 70 distinct experiments.

OpenMOLE usually delegates the tasks execution to many different computers. To gather the results of these remote executions, we use a mechanism called hooks. Hooks can be assimilated to a listener that saves or display results. Most of the time it is enough to use the hook keyword provided to either display or store the results of the exploration process. Hooks are more thoroughly described in a specific section of the documentation.

Bringing all the pieces together 🔗

Now that we have defined each component, we can compose the workflow that brings all the pieces of the simulation together: At the end of the execution, you will find the output values in a file called result.csv.

When working with models with a large number of parameters and/or outputs, writing the script can be already painful just when defining the prototypes. Fortunately, OpenMOLE includes an import wizard in its interface, for several languages including NetLogo. To use it, use the button New project and the option Import your model. The wizard will detect your parameters and outputs (defined in the GUI), the resources used (such as external files), and propose in an interactive window to change these. Once you validate, a minimal script is created.

Netlogo combines a GUI created by the user, in which they can define parameters and run functions, and the source code itself. Sometimes, you have to modify your code slightly to make it purely headless so that it can be run everywhere. NetLogo is a graphical framework. As such, many variables of a model developed in NetLogo are set through widgets (a graphical component). In the NetLogo World, setting or getting a value on the model inputs is generally achieved by calling set or get on the widget object. In OpenMOLE however, the NetLogo program has to be parameterised without the GUI. Models must be used in headless mode with OpenMOLE. This is not a problem because globals with unspecified values in the OpenMOLE NetLogoTask will take the default values defined in widgets. There is no strict requirement for a normal model to run, except that the user cannot access plots nor reporters, or export images of the world. Global variables defined in the GUI (as sliders or switches for example) are still available and can be set from the OpenMOLE script. We recommend however the following ``best practices'': These best practices may be too constraining for simple experiments, we give therefore the following less strict guidelines: The following shows the application of these guidelines to the NetLogo model introduced before.

Application to the Fire model 🔗

Fire.nlogo has a widget slider named density which is a global implicit.

This excerpt shows the initial-trees and burned-trees variables which are explicit globals. They can be used directly in OpenMOLE.

We propose here a simple method to better organise your code in order to make it manipulable by OpenMOLE: 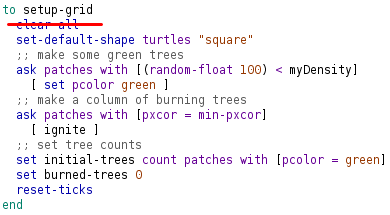 More examples of working with NetLogo models can be found in specific tutorials. See this first tutorial on a simple sensitivity analysis with the NetLogo Fire Model. Also check out this tutorial to learn how OpenMOLE can help you calibrate your NetLogo model using Genetic Algorithms.
Available tasks
Scala
Java
Python
R
NetLogo
GAMA
Scilab
Julia
Any Other Executable
See also in the doc
Plug
Explore
Scale Up
Language
Genetic Algorithms
Developers
GUI